There are 5 main species of wrasse found in Irish waters: the Ballan wrasse (Labrus bergylta), the Cuckoo wrasse (Labrus mixtus), the Corkwing wrasse (Symphodus melops), the Rock cook (Centrolabrus exoletus) and the Goldsinny (Ctenolabrus rupestris). With a little practice all species can be quickly and reliably identified in the field and Seasarch Ireland welcomes records of all species or you can log a record directly with the National Biodiversity Data Centre.

The extremely distinctive colouration of the Cuckoo wrasse makes it the easiest of all the wrasse species to identify. The males have bright blue heads with blue stripes extending back the body surrounded by vivid orange colouration, while the females are a reddish-orange colour with 2-3 distinct black and white patches to the rear of the fishes dorsal fin.

The Ballan wrasse is the largest of the wrasse species found in Irish waters and is largely identified by size and, with smaller individuals particularly, by process of elimination (i.e. if it’s not identifiable as any of the other wrasse it’s most likely a Ballan wrasse). This species is highly variable in colour with red individuals, orange, green and even pale with dark speckling. 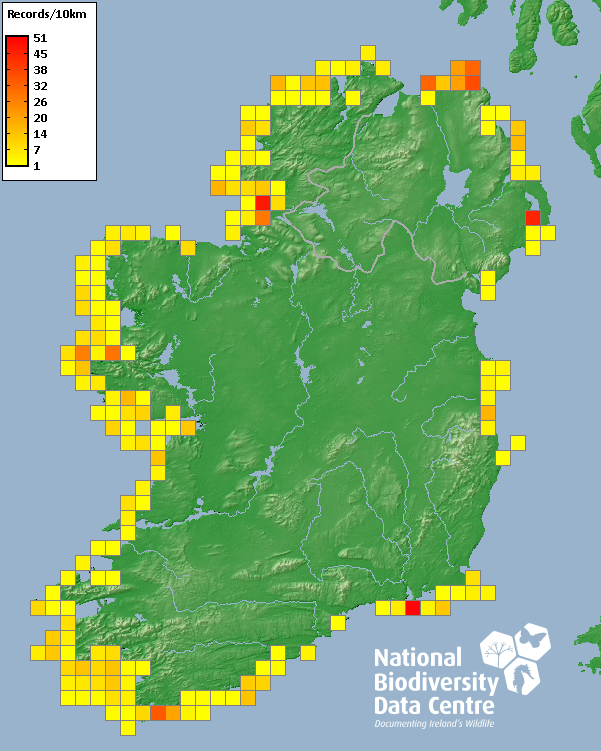 Distribution of the Ballan wrasse (Labrus bergylta) from the National Biodiversity Data Centre. Maps can be accessed at BiodiversityIreland.ie

The most distinctive of all the wrasse species found in Irish waters the Cuckoo wrasse wouldn’t look out of place on a tropical reef. Breeding males are unmistakable with their bright vivid blue head and stripes extending back the body surrounded by orange colouring. The females are a reddish orange with alternating bands of black and white (though can appear yellow) on the rear dorsal surface just before the tail fin. This species is unlikely to be confused with any of the other Irish wrasse species. 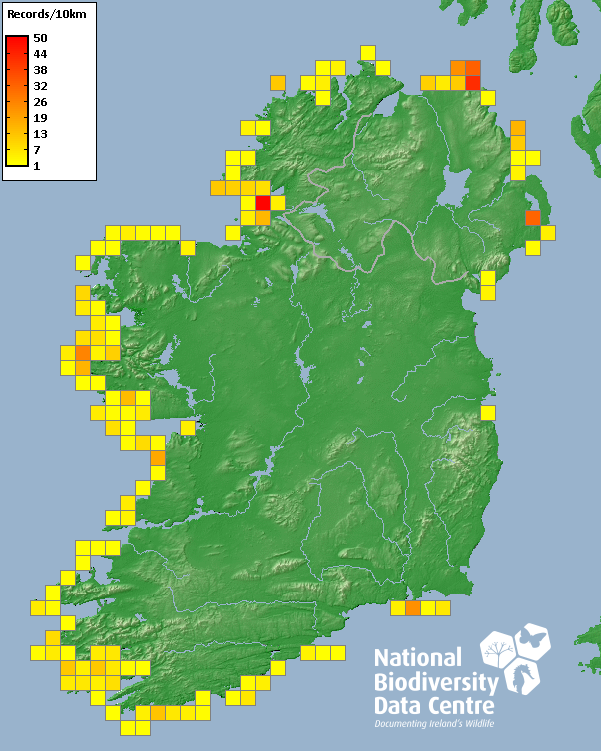 Distribution of the Cuckoo wrasse (Labrus mixtus) from the National Biodiversity Data Centre. Maps can be accessed at BiodiversityIreland.ie

A commonly seen wrasse, this species is possilby slightly under recorded in Irish waters due to identication confusion with small ballan wrasse and corkwing wrasse. Breeding males (below) are quite distinctive with irridescent blue-green lines on the face with the dorsal fin generally held erect. In the case of non-breeding males or females the dark spot at the base of the tail fin is an easily spotted diagnostic feature for this species. This species is generally found in seaweed dominated habitats. 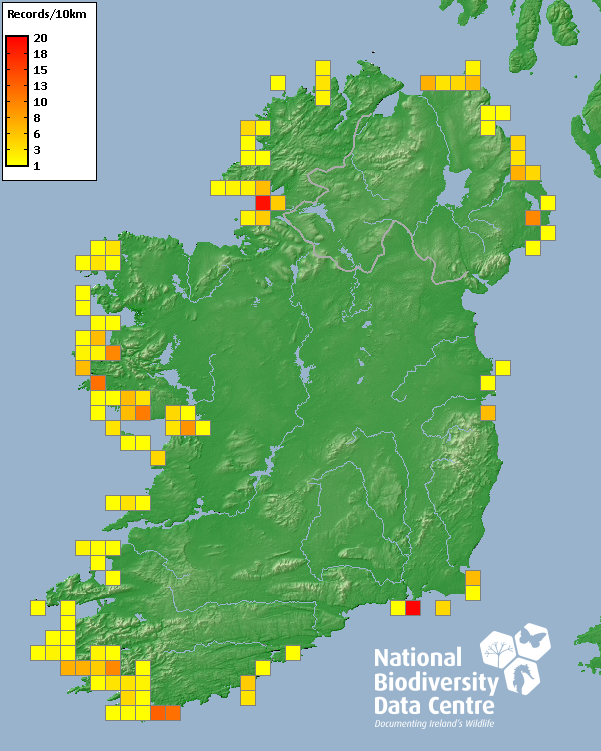 Distribution of the Corkwing wrasse (Symphodus melops) from the National Biodiversity Data Centre. Maps can be accessed at BiodiversityIreland.ie 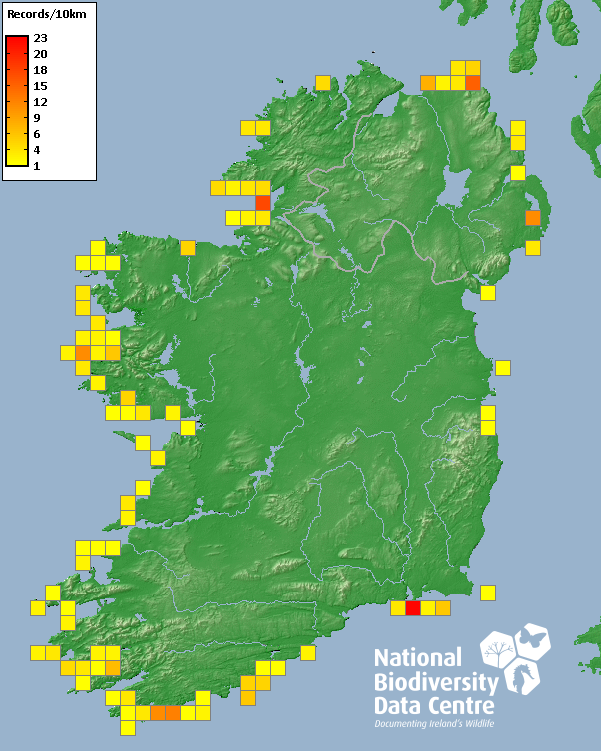 Distribution of the Rock cook (Centrolabrus exoletus) from the National Biodiversity Data Centre. Maps can be accessed at BiodiversityIreland.ie

An orange fish the goldsinny can be readily and reliably identified in the field by the presence of a dark spot at the top of the fish just before the tail fin. This feature appears to be present in all goldsinny individuals and is easily seen even at a glance. The goldsinny is also considerably more slender than the other wrasse species and is quite small (though obviously some confusion may occur with juveniles of other species). Goldsinny are found in a wide variety of habitats and along with the ballan wrasse are probably the wrasse most commonly seen by divers. 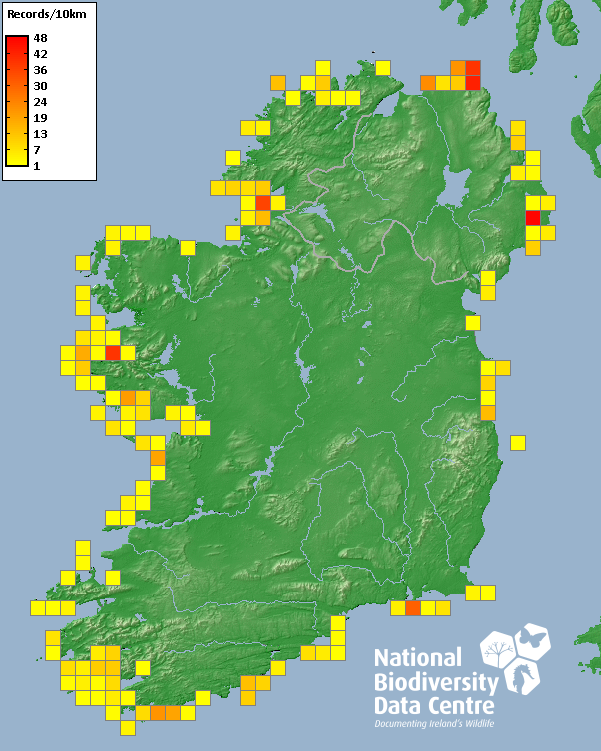 Distribution of the Goldsinny (Ctenolabrus rupestris) from the National Biodiversity Data Centre. Maps can be accessed at BiodiversityIreland.ie

A 6th species of wrasse is present in Ireland the Baillion’s wrasse (Symphodus ballioni) which is only confirmed from one site on the west coast of Ireland. However it is difficult to distinguish this species from the corkwing wrasse, except in the case of breeding males which have bright pink lips and build nests from seaweed in shallow waters. If you suspect you’ve seen a Baillon’s wrasse, send photographs to SeasearchIreland@gmail.com so that we can verify the record. 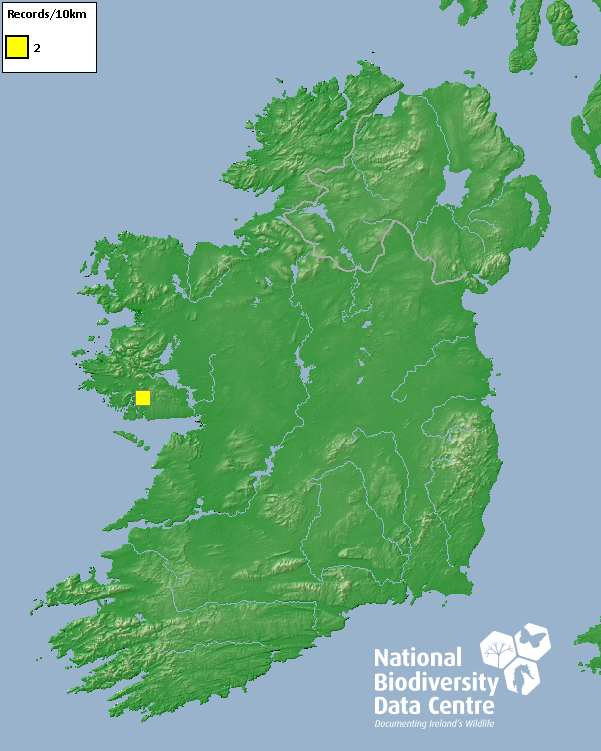